Make sure to be careful not to leave food out through the night that will attract unwanted animals.  For example, there was a man and son at a campground we went to and one night they decided to make bacon.  They put away and washed everything that was associated with the bacon. But, that night, when they were in their tent, they heard a bear sniffing around their campsite.  The bear smelled the bacon scent on the man’s hands and clothes.  The bear continued to sniff around as they called 911. When the police car came it scared it off. 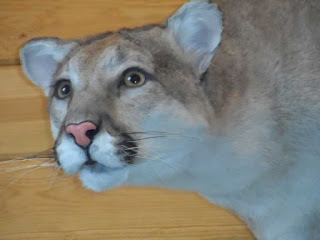 Mountain lions are looking for easy prey and will tend to not attack if they are seen.  Remember that this is not always the case, though.  Also, stay in a group.  Don’t let your young children go way ahead of you.  There was a little boy in Colorado who ran about ten feet in front of his dad and a mountain lion just ran over and carried him off and killed him.


I have an article on our website that is just about mountain lions.  Here is the link- http://explore.smithpromagazine.com/2014/08/mountain-lions.html

We also keep an eye out for bears.  They can be just about anywhere.  Some things you can do to keep them away is to carry bear bells, supposedly the noise keeps them away.  There is controversy about it though; some people say that it just attracts them to you.  I would look up the subject if you are thinking about getting them.  You can also carry bear spray.  This is very handy.  It is a bottle filled with a mist like thing that will, most of the time, keep the bears from attacking you. We have had some experiences with bears before.  We were at a campground in Colorado and this place had a bear with two cubs and then there was another bear with two cubs that would come and walk right around and in the campground.  One-time Cody was taking some garbage to the garbage can and when he put the lid down right behind it was a bear on its hind legs!  Cody slowly backed away from the garbage all the way to our camper, which was maybe 30ft away, down a hill.  My Mother has an article about bears that is on our website, this is the link-http://thelemonadedigest.com/issue/the-lemonade-digest/article/cooking-in-bear-country

One other thing to keep in mind is that when in an area with alligators or crocodiles keep your eye out!  They are animals that will stalk you.  Make sure to look over the play grounds that you go too; if alligators are in area there is a possibility that there is one in it.  If you would like more info on alligators and crocodiles, you can look at an article my older sister Hanna put on our website about them.  Here is the link-
http://thelemonadedigest.com/issue/the-lemonade-digest/article/alligator-and-crocodile-danger

If we stay at a campground for a long time, we tend to spray around our camper for insects and bugs. My older brother Cody wrote an article about insects on our website, here is the link
http://thelemonadedigest.com/issue/the-lemonade-digest/article/dangerous-insects-of-the-united-states

One thing that helps keep them away is to make sure that the things in and outside your camper are kept nice and neat. This helps because then they won’t have many places to hide.  Always remember that a camper is not totally sealed, so bugs can still get in, even when it seems like it is.

Another insect and bug nuisance are flies, hornets, and wasps.  One thing that will help with keeping away flies is checking to see if there are horses and cows around the campground.  Wasps and hornets like to hang around water.  One time when we were at a campground in Missouri there was a drip on the air conditioner that attracted wasps and hornets. There was nothing that we could do about it though; there was no way that we would turn the air conditioner off, because we were in Missouri, in the summer, with humidity.

When we go to campgrounds we tend to check if there are dog play areas.  We do this so Gabriel, Josie, and Tytus don’t go and roll in dog poo.  It’s also a good idea, for your own safety, to keep your dog on a leash.  If the dog is just running around, it’s practically screaming “Hey mountain lions and bears, come and get me!”

In places like South Dakota and North Dakota, there are bison.  These animals are sometimes called buffalo, but the proper name is bison.  Though they don't normally attack people they will and can if they want to.  If they are angered, the person or people can be 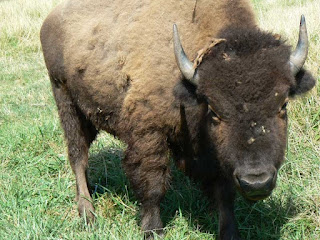 mauled by it.  The attacks can be fatal.  So, to be careful my family and I never get out of the vehicle to take pictures of them or get to close to them when not in the vehicle.  And even when you are in a vehicle they can still ram it and bust windows.  One of the best things to do to prevent an attack is to be aware of your surroundings, because there isn't a lot that can be done to escape if someone is attacked.  They can out run humans and can throw someone into the air with ease.

It is good to remember, whenever you camp by someone, is that you, a lot of times, don’t know the camper beside you.  There are some weirdoes out there.  Be on your guard at all times and make sure to lock your doors.

We make sure to pay close attention to rivers and streams when we’re by them, because of flash floods. We were at a river one time and suddenly it started to rise very fast!  We quick ran back up to our van and got out of there.

There are so many other dangers in traveling I could make this article go on for a long time, but a few other ones are-
Tornados
Ice Storms
High winds
Tires blowing out
Sharks