on March 04, 2015
Bison Goring
Bison are strong and powerful creatures that our all over the West. This article tells you about bison goring, which are not an unusual thing. 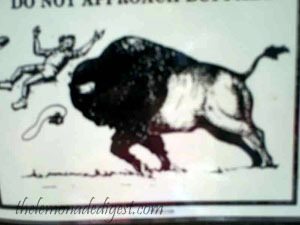 Bison
Throughout out our travels we have come across many Bison or Buffalo.  It is debated what their real name is, but for more info on their real name look at this article on our website.

The main reason this article is being written is because of my older brother Cody.  While in Yellowstone National Park we encountered many Bison.  They are literally everywhere! They go just about everywhere, including roads, except where they are out fenced out of.  There were times when we would drive right through a huge herd of Bison, they were close enough that if we stretched our arms out we would have felt them.  Some people were on motorcycles, the Bison were basically up in their faces.
There are ways to enjoy the Bison safely.  Like look at them through the car or from a building or such.  But 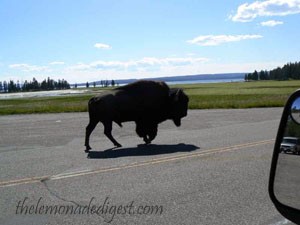 some people think that Bison our big nice fluffy animals that will let you get 5 feet away from them.  Not so.  We don’t know how many people we saw get feet away from the bison for a picture. Apparently, they thought a picture was worth dying over.

The facts are if a bison attacks charges you, you probably will get hit.  They can run about 35-40 mph and a human, at their absolute fastest, can go 28 mph (That’s the fastest a person has ever run recorded).  That is about half the speed of a bison. Bison are basically all muscle.  They stand 5-6.5 feet tall when fully grown.  They have horns that can get 2 feet long.  When they charge, there is not much of a chance of getting away.
An interesting fact is that in 1980 and 1999 there were 79 people hurt at Yellowstone National Park verses the 24 bear attacks during that same span of time.

So what can you do if you are attacked? Well, I have looked around and apparently there are no instructions on what to do.  They are too fast to run away, too powerful to fight like you would do if a mountain lion attacked.  But one thing you can do is stay safe when around them.  Don’t get up close, stay in your vehicle or you could end up like these people-

One woman was gored by a bison at Yellowstone National Park.  She said that they saw a bison and decided to get a closer look.  While she and a friend were up close to it supposedly a group also looking at the bison threw a stick at it.  That angered the bison and it charged them. From the attack she had minor scrapes and cuts and her knees swelled to the size of footballs.  She said that when she was attacked she was just waiting for everything to go black and that she thought it was the end.  Information from CNN website. 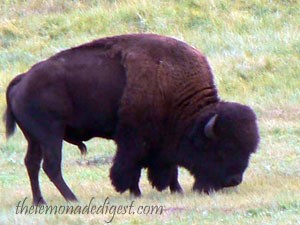 Another story the person was a little safer.  A child was close to a bison and was being urged by a videotaping parent to touch it.  The child barely escaped getting attacked.  Info was gotten from the CBS News website.  To see the video and get more information click here.

Another story says that a man was gored when trying to get a bison to raise its head for a photograph.  He was charged with harassing wildlife.  Information from Los Angeles Times.  To get more info click here.

Another story in the Yellow Stone Gate says that a man was getting a picture of a bison out of his vehicle when the bison attacked.  He was flung about ten feet in the air and then pinned to the ground. From the goring he got several rib injuries, groin injuries, a broken shoulder blade and collarbone.  To get more information click here.

Another man saw some bison had escaped their pen. He then went over, not in his vehicle, and tried to herd them back.  Saying that he was trying to prevent a traffic hazard for motorcycle list.  One of the bison “ran him down and pierced his leg with one of its horns.”  He was held in a hospital for one day.  To get more information click here.

With all these stories in mind listen to this song made up by my older brother, Cody who at the time was about 17, while at Yellowstone National Park.  We were driving home after a long day of hiking.  Bison were in the road and dad had to slam on the brakes.  Cody was in the back seat and had mom’s cell phone.  He recorded 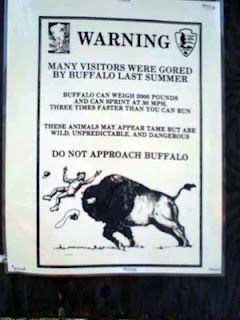 the song. Now, 6 years later he is a Park Ranger at Wind Cave National Park and has to deal with this problem daily.

Info for article was gotten from National Geographic, Planet Deadly, and the above websites.