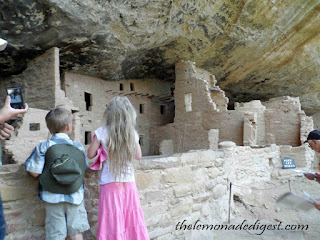 Mesa Verde National Park is located in Colorado.  This article is some facts on it and the adventure that we had on a trail with a 30 foot ladder, including smaller ones, and with a 12 foot tunnel!

Mesa Verde!  This awesome place is located in Montezuma County, Colorado.  There are near 4,000 archaeological sites and over 600 cliff dwellings.  The cliff dwellings were made by the Anasazi people who inhabited the mesa from about 600 to 1300.  Drought was the reason that they moved.  Water was very important to them because they were farmers.

My family and I made several trips there.  We liked it so much!  On the drive to the top of this really big mesa, you go on switch backs that are very, very close to the edge of the cliff.
When we got to the top, we stopped at a view point where you could get a great view of 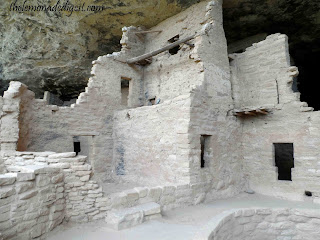 everything below the mesa.  There was once a dirt road there when the park was first made that went along the edge of the mesa’s cliff.  There were probably a lot of safety problems because-
The cars were old.
The road was dirt.
The road had no railing on the cliff’s edge!

It was, thankfully, shut down.  Now they have a safer road to drive on.  Some of the first road could be viewed from one of the first view points.

We then went to the visitor center to learn more about Mesa Verde.  There are Junior Ranger books available.  When we were in the visitor center, Mom saw that you could sign up for cliff hikes where we could get to see old Indian dwellings.  Quite awhile back, Indians had lived there.  The Indian dwellings are really neat there because a lot of them were built on the cliff.  There are a lot that were not, too.
So, our family looked at all the hikes and decided on Balcony House guided tour.  You had to go on a guided tour to do it, because of the cliffs.  We had to hurry to get there on time.  Since the trail was not good for younger kids, Josephine and Tytus stayed behind.  Mom had 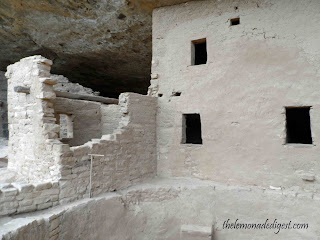 to stay to watch them. On our drive to the start of the trail for Balcony House, we talked about the trail.  There where 30ft ladders, steep cliffs, a tunnel to crawl though, and a cliff that you climb up holding on to a chain!
Right about then, Cody begins to pick on me about falling on the trail.  I just laughed along!


SISTER ADVICE: when your brother is messing with you, act like it does not upset you and then they will stop.  Trust me!  My brother is great and I really, really love him.  He just likes to mess with me and I mess with him right back!

We finally reached the start of the trail where everyone signed up for the hike.  Those of us who where going on the hike quickly ate something before we hit the trail.  After maybe 15 minutes of waiting, the ranger that was leading the hike arrived.  He gave us instructions for on the trail.  Then, finally, we headed out.  We said bye to Mom, Tytus, and Josephine.  After about 2 minutes on the trail we reached a set of stairs that where on the cliff.  We all carefully climbed down them.  It would hurt pretty bad to fall off them.  Then we came to the first ladder, which was maybe 15 feet tall.
It was really nice because the ladder was big enough for us to climb up beside each other.  I 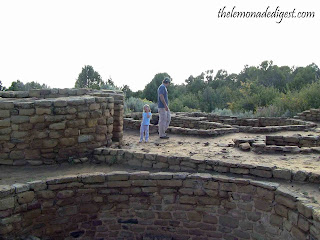 knew that I could do it, but I was worried about my little brother Gabriel.  He was old enough for the hike and Dad was by him but I was still worried.

So, we all made it up the ladder without any injures. After that, we kept walking and walking on a pretty flat part of the trail.  Then we reached a small ladder maybe 5ft.  That was the final one to the Balcony House!  When we got there we got to look around with the ranger leading, of course.  The Balcony House looked like a big house on a cliff!  There were quite a few windows on it, too. The view was very pretty.  We looked around for maybe 15 minutes.  We then hit the trail again.

After that, we came to the tunnel.  It wasn’t that big, 12 feet long.  Around the middle there is a rock like thing that you have to crawl around.  Gabriel and I had lots of fun climbing through that!
Soon after, we reached the 30 foot ladder.  After the ranger instructed us in how to climb, we headed up in the same order of last time.  The ladder was huge and made out of wood.  It was really cool to climb. 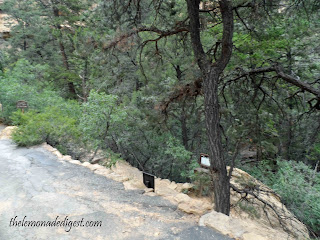 When we finished that, we came to a cliff/steep slope to climb by holding on to a chain.  That was something I had never gotten to try before and it is definitely something that I will never forget!

We reached the end of the trail after that.  We had a great time and told everyone else in the family how great it was!


Article by my sister Hanna on our website- http://thelemonadedigest.com/issue/the-lemonade-digest/article/mesa-verde-national-park

Video made by my brother Cody on Mesa Verde- http://thelemonadedigest.com/issue/the-lemonade-digest/article/the-smiths-explore-mesa-verde-national-park 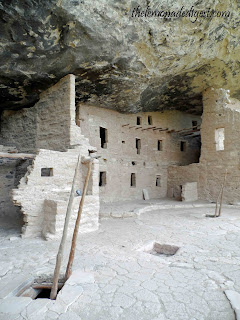